Top moments of Jiren The Gray 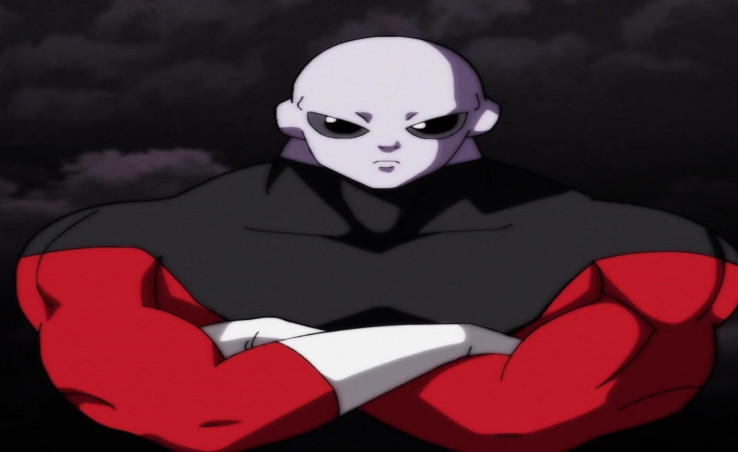 At the Beginning of the tournament of power, there was a whole spectrum of new characters emerging characters coming on the scene. Each having their own perspective of life and philosophies adding more depth to the overall Dragon Ball Super story. Jiren introduction to the audience was one with mystery and strength and viewers first see in a black void an "alien" being meditating with strange red ki aura. This mysterious introduction gave the audience something to look forward too what is this person name and what powers does he hold and what challenges does He and Pride Troopers give  Goku and Universe 7.

When the tournament was about them to set in place, forces were starting to initialize and fighters across many different multiverses were ready to fight off for survival. Goku being the oblivious to different parties interest with one another wanted to greet Toppo and the other Pride Troopers. However, upon approaching them, Jiren without Goku sensing him seeks up behind. With all the years of Goku fighting many diverse opponents who can scared Goku from behind, or is Jiren in a league of his own. And the mono deep tone of Jiren is gave the notion this person you do not want to mess with

In the heat of battle, the universes start to clash and fighters had one thing on their minds survival. In the midst of the clash, Goku and others fought with universe 6 Kale (a female version of Broly). Everything one of course struggle with her prowess and dominance in here rage mode. Then suddenly Jiren comes and easily pushes her away in the sky and shortly puts her down with a red-orange ki blast. Jiren without breaking a sweat puts down an oppenent other prominent fighters in that time had to struggle. What more can Jiren do? Surely putting down an opponent brought the attention of all the other fighter in the Tournament of Power.

4. Jiren beats down on Hit

The fight against Jiren and Hit was more of staple fight than his fight with Goku in relation to people at the tournament. Honestly, up till that fight Hit remain hidden waiting for the opportune time to strike. Hit was not even concerned with Goku and company, Hit had bigger fish to deal with because inversely Hit could handle Goku and Vegeta. When the time came these two bosses fought, raw power was displayed and Jiren laid the hammer on once thought semi-invisible Hit a fighter who could control time and move in and out dimension. This basically showed Jiren was the person to beat period.

5. Jiren first face off with Goku

This fight broke the Internet. Goku and Jiren was a monumental fight not only in the Tournament of Power be also culturally worldwide, with every opponent Goku had to face it took another transformation. Here Goku Ultra Instinct proved not even enough to close the gap with the Titian. Honestly, it was here Jiren seem unbeatable and the story would possibly go a different route as aspect. What could defeat Jiren a good old fusion who knows?

Jiren after defeating all the strongest opponents at the time, Jiren resign. A slap of disrespect to other fighters in other Universes, and outsource the "work" to Toppo and Dsypo. Here Jiren announces himself the winner of the tournament of power. Anyone who dares to approach me had to go through Toppo and Dyspo my guardian. The self-acclaimed winner continued in his meditation stance awaiting victory. Hubris backed with raw power is a hard pill to bite for opposing parties.

7. Jiren faces off with Vegeta

Everyone had a piece of Jiren until the Prince of Sayains Vegeta. As expected Vegeta get the Jiren hammer and adding one more win to Jiren onslaught on fighters in the Tournament of Power. Through the quick fight with Jiren, it is obviously not one fighter is going to beat Jiren singly handly and it is going to take team or network of fighters to bring Jiren down.

8. Jiren takes on Both Goku and Vegeta head on

Jiren is to take on two fully powered Goku and Vegeta. It shows maybe a fusion might come out this fight. It would take a Gogeta or Vegito akin strength to take this titan down even though would that be enough to take him down?

Frieza remained to the punching bag in the whole Tournament of Power saga. Amongst all the hammer downs Jiren put on the fighters in the Tournament of Power it was now Frieza's turn. And man it was a beat down, enough to tear off proud fighters tail off. Jiren in this clip was worn out with his fight with Goku master Ultra Instinct had enough power to knock sense in Goku's old nemesis.

10. Jiren realizes he has friends

Jiren had a  traumatic past and had to rely on his power to get want he wanted from the people around him. Toppo always thought of Jiren as a friend. Through the history of their acquaintance, both did not see eye to eye. Even though Jiren lost in the Tournament of Power Jiren realize his had support and friendship in the Pride Troopers. In this scene, Jiren finally sees Toppo as friend show his emotions, waits to fight Goku and universes to test his strength.