In some viewpoint of age, older, you become the weaker and more senile. That couldn't be any further from the truth. The older, the better. Life gets more precious when you age your plans, and goals resolve. Let's dive into old anime characters that show age is just a number.

One of the oldest and wisest Namekian in series. Member of the dragon class of Namekian who have the power to make dragon balls. A Father of many namekians, some way or other every Namekian has as a connection to Guru even Piccolo. Has the inherent ability to unlock the hidden powers of individuals. Guru what the first to opens Gohan's latent skills. Guru unlocking of Gohan powers was pivotal in the Gohan's journey later on in the series.

A prominent leader in the Naruto series a sole leader of ninja hidden village of rock. With Genkai Kekkei Genkai of rock release. A well-seasoned veteran in ninja combat. He helped lead the assault in the Ninja war against Madara.

The grandfather of Tenchi Muyo.  Being crown prince of planet Jurai does come with its headaches. His family has endured lots of political turmoil because of the lineage of his mother being from Earth. Upon conflict with all Jurai, he escapes to Earth to live a simple life. Its takes these extraterrestrial pressure in stride. He loves his family and shows it is worth to live your truth is worth it.

Mutaito was the savior of the world way before Goku. One his signature move is ki blade technique able to split a waterfall in half. In time travel loop, kid Goku in the past to fight him and got tail handed to him. Upon his fight with evil King Piccolo, he sealed him in a rice cooker(go figure) with a move called evil containment wave. The mentor of Master Roshi who taught him on the concepts of ki, who later on built on what his master taught him to create Kamehameha wave and train the future dragon ball fighters.

In younger days as a fighter, his staple personalities were fighting first and ask questions later. However, in the latter stages of his life, is takes the back seat and more of the supportive role. Adaptive in stand abilities and overall combat. Joseph Joestar is the original gangster.

With an age span of over ninety, can beat up and keep his with fighters way more than half his age. A rank of  S class fighters who create a natural disaster, using less than 0% percent of his energy(we are not talking about the whole number here). Protective of his grandaughter Miu goes to show even though he world-class fighter he soft spot for his loved ones.

Most likely, the oldest member in this list. Old Kai Was former supreme kai,  unfortunately, was sealed in Z sword by a witch. The knowledge and wisdom he has about ki energy and creation run deep. Upon Gohan pulling out the Z sword and training with it, he broke it which free Old Kai. As to return the favor, Old Kai releases Gohan's Mystic body. 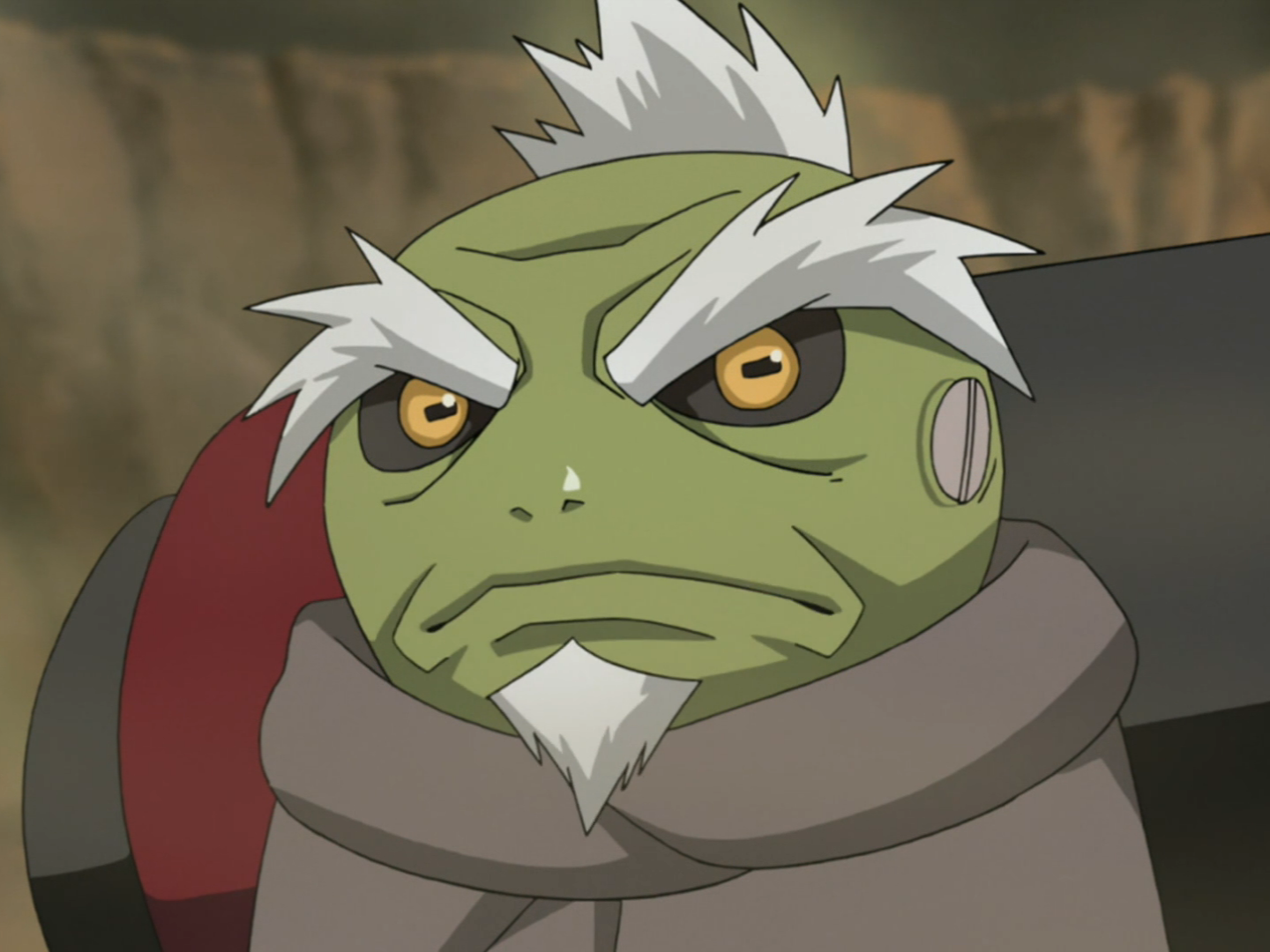 A toad with serious ninja skill. Fukusaku has been around way before for the majority of characters in Naruto series? A mentor of mentors, Jiraiya's teacher. Who later taught  Naruto about toad summons and mentored him on the pathway on becoming sage mode? He has been around the block and continues to provide valuable knowledge to protagonists.

A former leader of the Japanese mafia called Yakuza. Step down from his notorious position to spend more time with his family. A nobleman, man of his word. Despite his shady history with Yakuza he had a robust support system with Otose and helped get back on track with life.  A formidable fighter with the sword and renowned with his skills all of japan. During his Joui War, his best friend dies trying to protect him; this traumatic experience is what probably made his shift to Yakuza. Howbeit, even though involved in originated crime, he still cares for his family and close circle.

Big things come in small packages. Don't let the size of Makarov fool you. He is pretty powerful when it comes to magic use and hand to hand combat. With the ability to grow giant size to fight his opponents he is a preeminent character in the Fairy Tail series. Despite all of his skills, he has a soft spot for people a generally caring person and has listening ears to all who come within his vicinity.

A high ranking marine as an admiral in the One Piece universe. Has family ties with Luffy of the Straw Hat Pirates, who is continually giving tough love.  He pulls on both worlds of Marines and Pirates he cooperates between them gracefully. 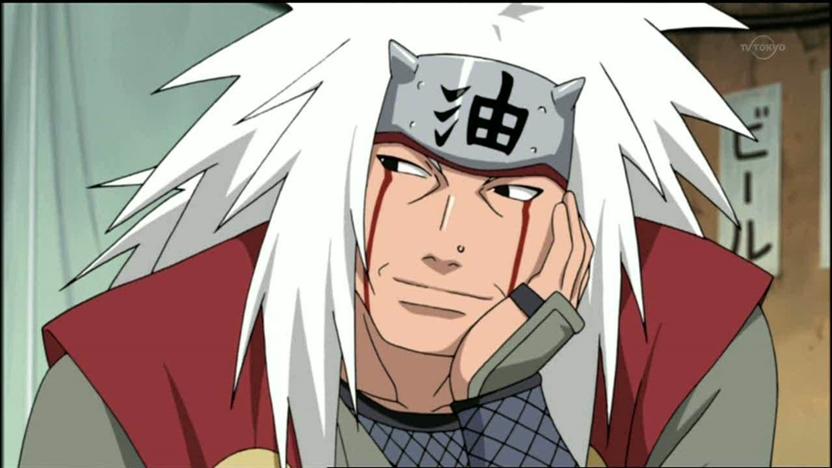 A legendary ninja from the hidden leaf village.  Jiraiya fought in many Ninja wars master of the toad sage mode. The author of Icha Icha novel series read by many people, including Kakashi Hatake.  Jiraiya may have a strong drive towards women even him hitting on his former teammate Tusande this didn't deter him on being masterful in ninjutsu. Mentor of Naruto and Minoto, being a formidable opponent, though his passing against Pain, leaves a strong legacy for Naruto and fandom. 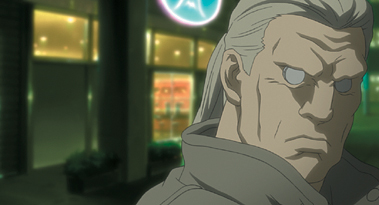 One of the top lieutenants in Section Nine recruited by Major in Ghost in the Shell. Mostly robot but still human. He can be rough with recruits in Section Nines such as Togusa, that can be understandable because he takes pride in his work and holds everyone in the same manner.  In the world, he lives in there is the complexity of foes to nation criminal cracking on a national scale and terrorism. Batou has seen his fair share of corruption and jumps in situations with a shoot first and ask questions later. In the world as unpredictable, you would Batou on your team.

The oldest member of the Enforcers. He deserves to be in this list because of poise demeanor in stressful situations; it is not easy for him to be a rattle. Always relying on his first principles, when checking on person rating through Dominator for sound judgment. A person like Tomomi is realistic, still pointing the rubber meets the road in real-life situations, and what you learn in training doesn't matter. 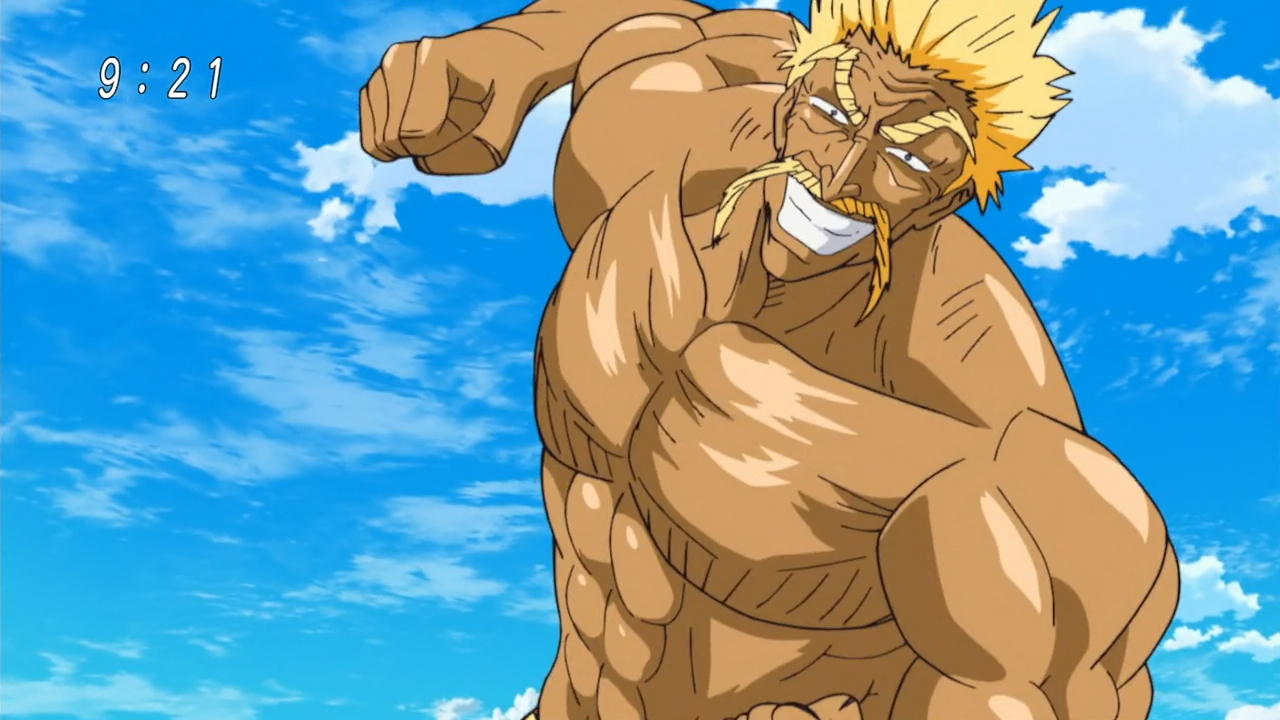 Let's dive in the world as a superpower. Ichriyu holds the hefty title of President of Gourmet Organization with god-like abilities. He as trained and mentored "four heavenly" kings, including Toriko the main protagonist of the story since childhood. He as the power to excerpt his gravitational pull as much as the planet. With a near bottomless appetite, he can harness it through  Appetite Energy with it interesting dynamic in harness your ki. Along with many abilities, one of his notable is he chopsticks which along with him to various techniques in battle. With plant buster abilities Ichiryu is an excellent addition to this list.

Called the "Dark King." Silvers was the right hand of past king Gold D. Roger and his first recruit of his former captain. Out of all the told legends behind Gold D Roger, Silvers knows his captain best and battle capabilities, he has seen a lot in the Grand Line and knows pieces of the puzzle where One Piece could be. Being proficient in combat and a prolific user of Haki. Mysterious pirate

Dot Pixis is an effective military leader approach in life in Attack on Titan series. In the acts and horrible events in the series, Dot Pixis is the person to give his soldiers courage in the Human race fight for survival against the Titians. Upon the Titans breaching Wall Rose he stod clam and gave people around him valor, vouches that death in battle for survival is better than running away in fear.

Ninja of Legend the Third Hokage of the Hidden Leaf Village. Sarutobi Sensai has fought many battles in the ninja wars and witness his fair share of realities of life and consequences of war. His decision making was part of the genocide command of The Uchiha Clan because they wanted to overthrow the Leaf Village government and take it for themselves. He and Danzō went to Itachi to wipe out Uchiha Clan, despite being a great leader sometimes decisions have to be made that does not surround sentimentality.

When this man strikes, the Earth shakes. With the power of Quakefruit. Most notably the only one to second to Gold D Rogers in fame and power, he has never turned his back in a fight.

A triple OG in the field.  Even in old age he still on his game and looks the best in every situation, the glass is always half full with Toshizou.  Always looking for gold and takes pride in his plans and goals, whats to build his world in rebellion against Japan. He deserves to be a list because of his decisiveness and leadership skills. With a killer instinct, he doesn't hesitate to take the life of his opponents. With Toshizou their honor in dying in battle.

Number 1 of Gotei 13. His Shikai has the power of two Bankai's, respectively. Too bad in the Bleach series more was not seen of him, it felt like the battle with Aizen was rush. If it were not for Wonderweiss Yamamoto could have beaten Aizen. Moreover, his Bankai "Zanka no Tachi" has the power of the surface of the sun, which is equivalent to a nuclear bomb explosion, Yamamoto can really "Turn all to ashes."

A powerful nun user even in old age. Was responsible for granting individuals their hunter license. Master of nun enhancement, he manifests this as 100-Type Guanyin Bodhisattva, Hunter X Hunter plays into religion philosophies it seems like Netero is on Buddhism. Netero deserves to be on this because he is a staple of older men can keep up and even beat younger fighters in their prime. Even though his fight with Netruem it debatable if he could have beaten him in his prime and not resort the nuke bomb planted in his chest. One of the most notable things about Isaac Netero' s 100-Type Guanyin Bodhisattva last resort "Zero Hand", which resembles Dragon Ball full-powered Vegeta's Final Flash, man I would not want to be caught in it.

One of Goku's first mentors, Master Roshi has aged well past 200 because he found the fountain of youth. The creator of the Kamehameha wave, the most used and variant move in Dragon Ball. 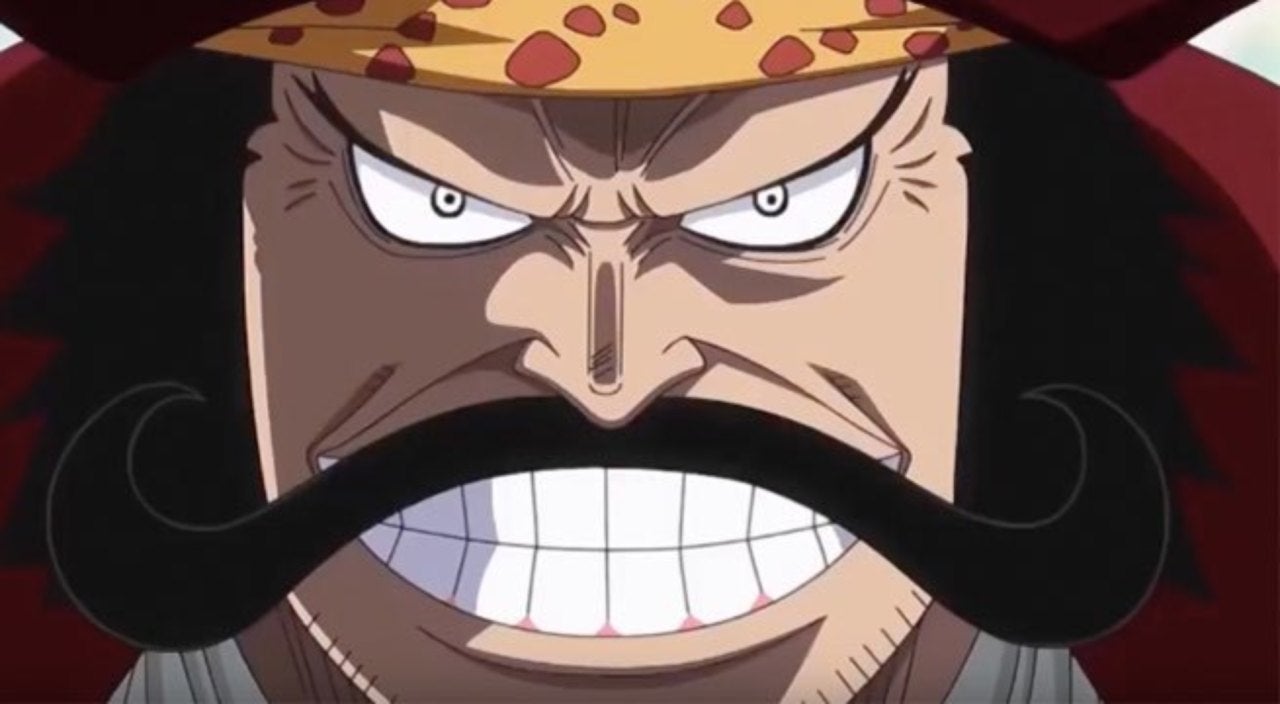 The deceased king of the pirates. Not much is know about Gol D. Roger whether or not he has Devil fruit power. However, for sure he has mastered all three form of Haki, especially conqueror haki. First, to be quoted to have D. in his name, there is a lot of speculation of his blood ties to Luffy, there might be a connection. He had several notable pirates in crew one of them is Shanks one of the Yanko's searching for one piece. Despite being Pirate and the strongest Yonko at the time, he had a big heart and saved people like Luffy does with his crew. One of the reasons he deserves to be on this list is selfless actions, and the influence he had on many people in One Piece universe. 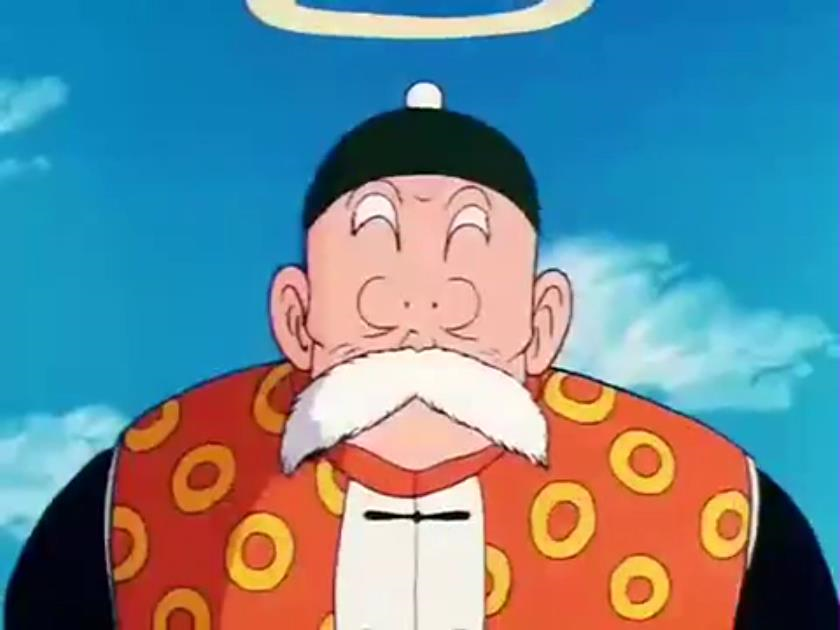 Serene and Gentle a student of Master Roshi. Who found Goku via Saiyan space pod. After his death, he visited Earth from the spirit world to fight his grandson Goku in World Tournament to see how to progress as a fighter, sure to say he is proud.