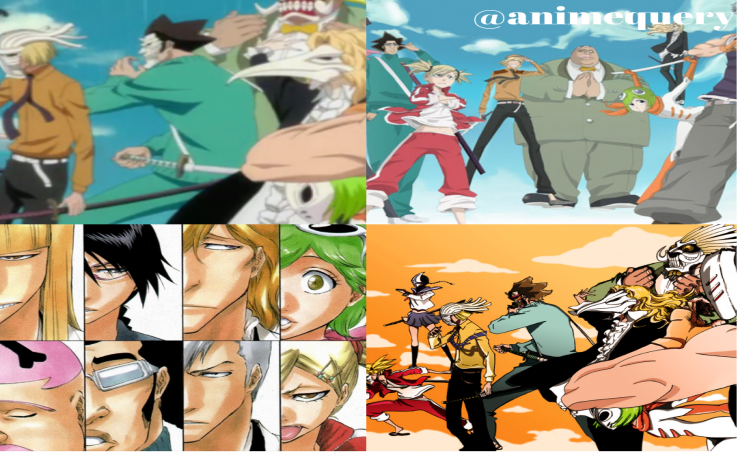 As one of the top animes in history, Bleach was known for its exciting battles, great story and their characters, the soul reapers, and especially the visored. The visored are a group of rouge soul reapers who have acquired hollow powers. You may think there are Arrancar, but they are the direct opposite of them. There are eight members in total, and those members are Shinzo Hirako, Love Aikawa, Rojuro Otoribashi, Kenshi Mugurama, Mashiro Kuna, Hiyori Sarugaki, Hachigen Ushōda, and Lisa Yadomaru. Unlike Arrancar, the hollow mask of the visored is undamaged. They can fuse their hollow power with their exiting soul reaper powers giving them massive increases in strength all around, but it’s only temporary, which is a downside and the duration of how long the hollow mask stays on varies from person to person, a positive note is that there is a way to make wearing the mask length longer, and that is training. But usually, the average length they can under hollowfication power is for the is three minutes. Well, they are getting past all that let's get to the main event. Here are our strongest visored ranked from weakest to strongest. 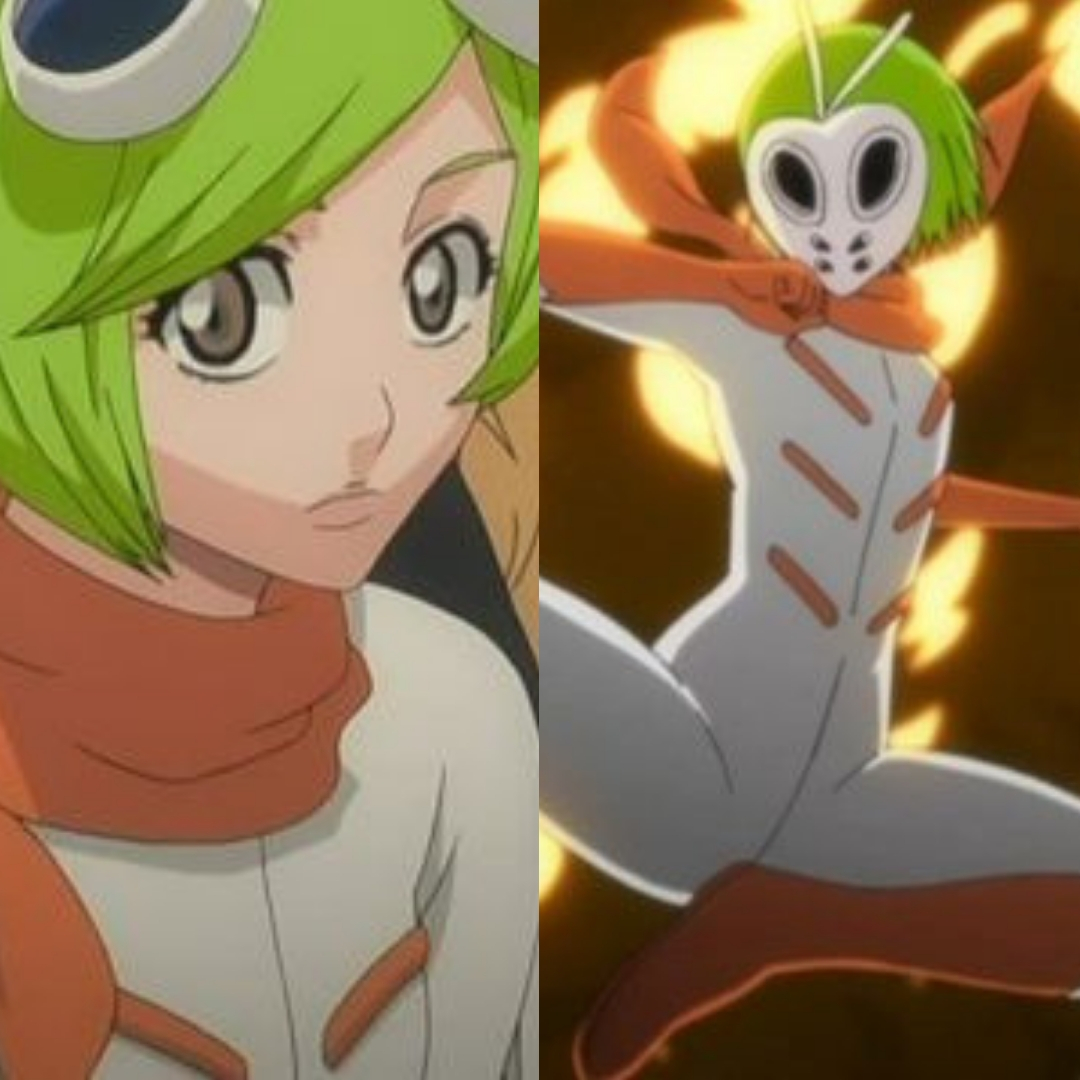 Well, start with Mashiro. It’s wasn’t hard or surprising to rank her here. She tends to be overconfident in her abilities and relies too much on her hollow powers instead of honing her soul reaper powers, which leads to her downfall; this was apparent with her fight with wonderweiss. Her Hollow mask designs remembrance a grasshopper with googly shaped eyes, four slits on the mouth area, and a small antenna. Despite her faults, she does bring some type of positive energy. 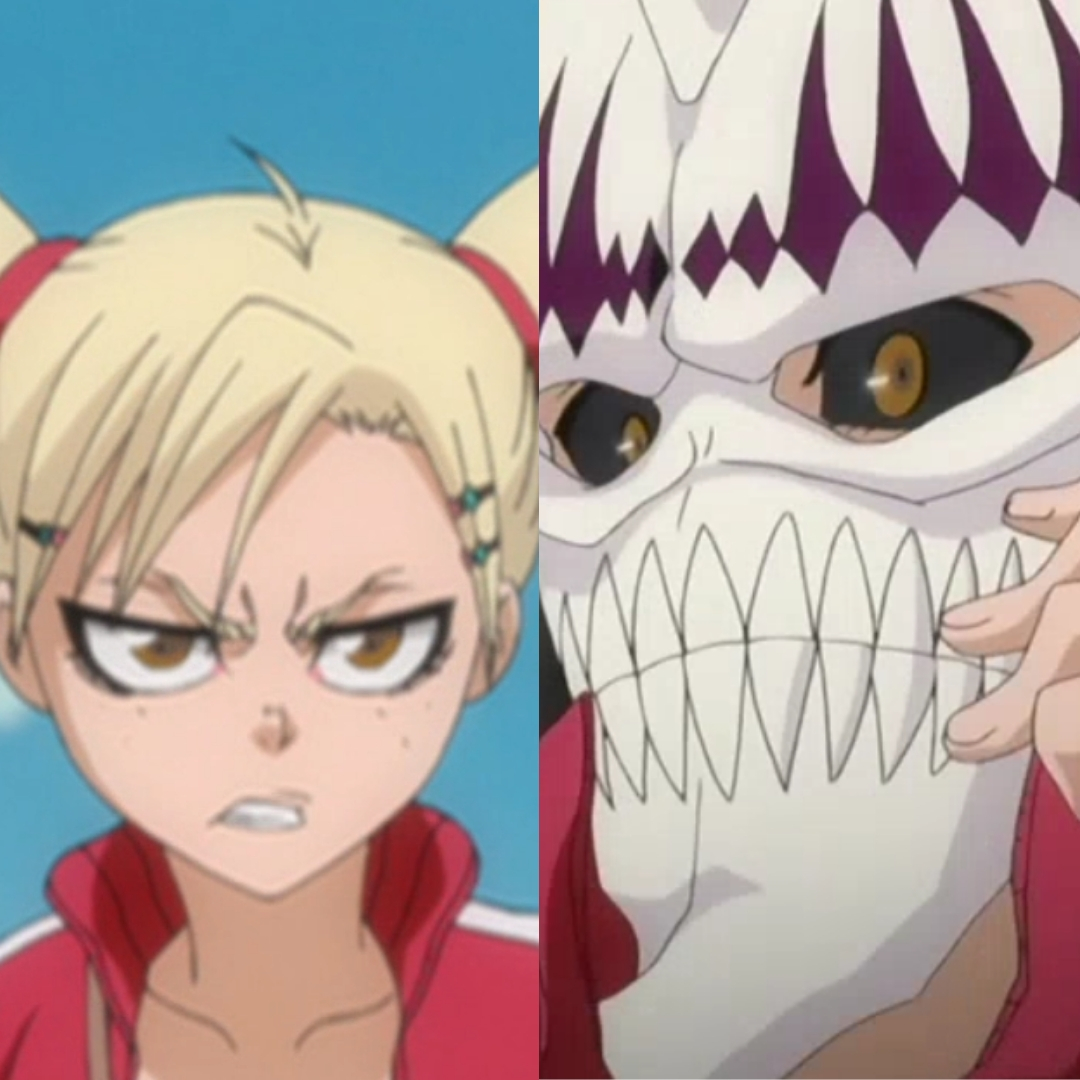 The red hot habanero of the group. Hiyori has an aggressive nature/fighting style. She doesn’t show much respect to the majority of people around her, especially Shinji. She has a lieutenant level of spiritual pressure. Her Zanpakuto Kubikiri meaning Head slicing serpent, is a standard manta.  When she uses her Shivaji, her Kuantan’s becomes a large cleaver like a blade. Her Shikai unique ability is unknown, and so is her Bankai since she hasn’t achieved it. Her hollow mask takes a general skeletal appearance but has a longhorn protruding on top of it with diamond markings. She is easily provoked, which is a bad thing, but her emotions lead to her getting stronger due to her hollow mask’s ability. She’s not as overconfident as Mashiro but way more emotional. Her triple cero isn’t something to scoff at either.

The past lieutenant of the 8th division under Shinsuui Kyoraku and now current captain of the 8th division. She’s the cool calm and collected one in the group. She seems detached and secretive at most times, but she cares for her fellow visored. She’s almost like the cool Beaty in the anime. She poses captain class spiritual pressure, and because she is visored, she also possesses dual-type spiritual energy. Her Zanpakuto Hauguro Tonnbo( Iron Dragonfly) resembles a hibachi as it has a greater length than most Zanpakuto. Her Shikai has the command smash. She activates her Shikai by slamming the hilt of the Zanpakuto into the hilt, causing it to lengthen to a long pole with a blade at one side and her Shikai’s unique ability to unleash multiple pierce attacks. Like everyone listed so far, her Bankai is unknown. Her hollow mask is diamond-shaped with a cross in the middle.

Strength isn't everything, and Hachigen helps strengthen this argument. I would rank him higher, but it feels like it would be overstepping boundaries. Even though he is enormous, Hachigen is very gentle and kind. His primary way of attacking is using Kidō and his intellect and observation, which was pretty apparent when `he uses Barragan’s aging power against him. He was the former lieutenant of Kido corps under the kido captain Tessai Tsukabishi, which explains his primary use of  Kidō mastery. If needed, he will engage with his katana. For his hollow mask at first, it was an ordinary mask with, but then later on n the show, it changed to resembling a Balinese demon mask with tusks, native American feathers.  He’s ranked at the top of the lieutenant's section of visored due to his calm analytic nature.

Generally known as Rose. Rojuro was a former captain( well now he is the captain of the 3rd division). He typically has a bored expression. He’s also one of the few laid back people in the group. By his clothes and overall appearance, you can tell he has interests in music as he is usually playing with his guitar. He also likes reading manga, which he hates people spoiling the plot. He treats his own fellow visored like family, which shows he's a nice guy. Rose is an expert swordsman,  Kidō, and Hohō expert in battle. His zanpakutō release plays where it becomes a golden whip. Pretty flash to me... Its ability is when rose taps the lash when the strap is attached to an enemy; the whip glows and vibrates like a guitar making destructive soundwaves. His Bankai Kinshara Butōdan upon release forms a giant pair of hands where one is holding a baton and several beings with rose protrusions. Its ability is creating physical illusions. The music which plays allows the rose to have power over an opponent's heart. As long as the opponent's heart is deceived, the illusion is convincing enough o even cause physical damage. It’s like an upgrade tsukuyomi. 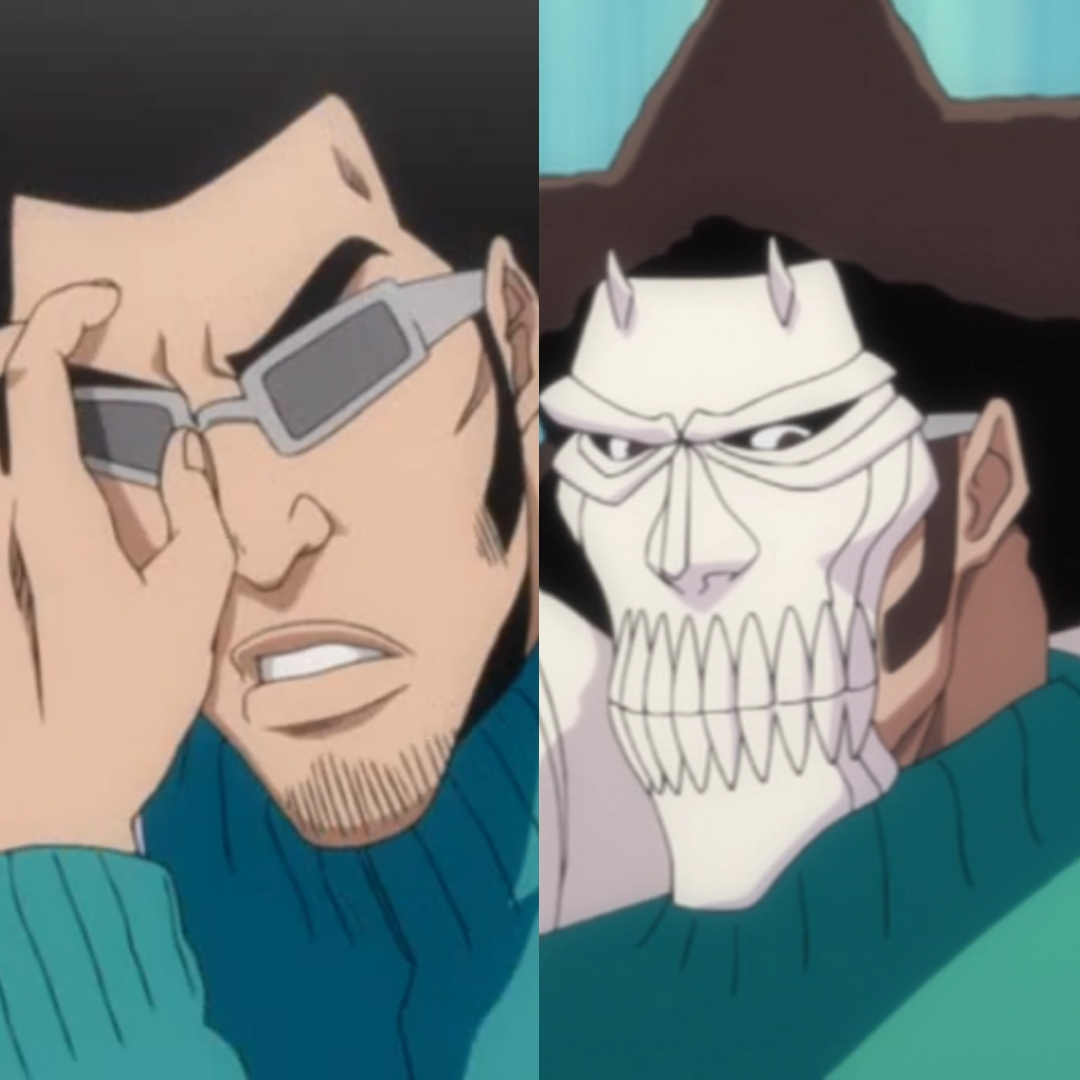 The former captain of the 7th division. Love is the laid back and easy going a member of the group.  Love is tall visored with a thick Afro, and don’t let his appearance Love can go from easy going to serious in an instant. Love’s fighting style doesn’t match his appearance as he is a brutal fighter as he gives his no opponents no room to retaliate. Almost like don’t judge a book by its cover.  His zanpakutō Tengumaru( Long-Nosed Goblin) looks like a simple katana. His Shikai release command is crushed down, which turns into a giant spiked club. His Shikai also can manipulate fire and has the right amount of endurance. His Bankai has not been revealed, although. His hollow mask resembles a simple one mask. His weakness( mainly for all Visored) is the hollowfication can only last for 3 minutes. But overall, he is a formidable character. 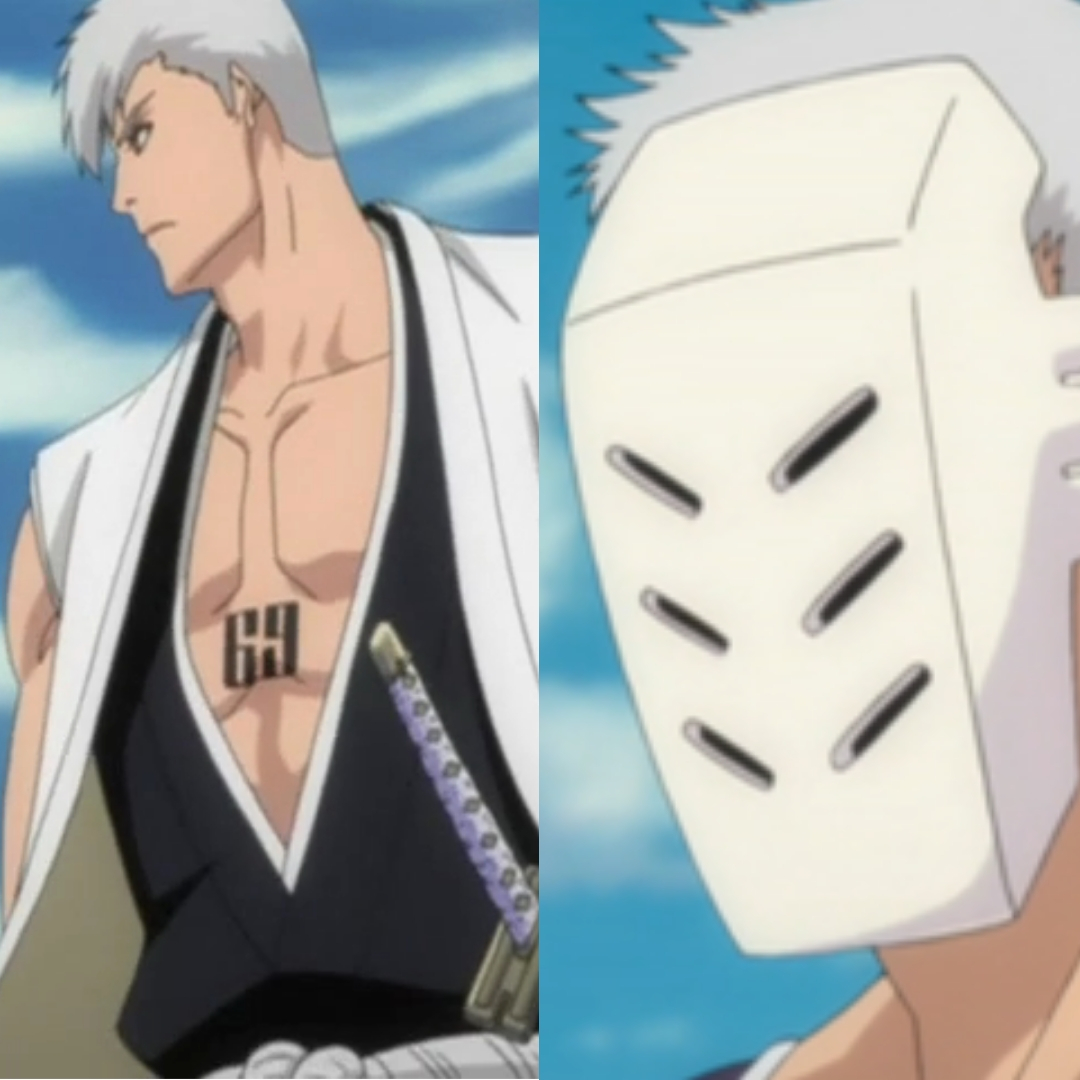 The current captain of the 9th division and one of the few captain levels visored. Kensai is a tall muscular with really sharp features. Judging by his facial expression alone, you can tell he is a severe and decisive person. He is easily annoyed by immaturity. This is evident in his relationship with mashiro.  Like Love, he doesn’t hold back against his opponents even against children, which shows his aggressive nature. Deep down, Kensei is a nice guy, but when he tries being nice, it gets offset with his anger, this personality trait could be someone in the military, maybe a sergeant. As most soul reapers, he is a master swordsman, with the addition of being a Shunpo expert. The only difference between him and the rest is that he is a Hakuda expert as he prefers hand-to-hand combat. His zanpakuto’s(Tachikaze) Shikai, when using the command “blow away” lets an air current be released and envelope the zanpakutō forming a combat knife. Kensei prefers to keep his zanpakutō this way and keeps it in his pocket.  Kensei’s shikai’s unique ability is to manipulate wind and energy. The real power of Kensei's zanpakutō lies in the ability to cause the path of the wind to explode. Kensei’s Bankai “Tekken Tachikaze” when activated an explosion of air surround Kensei and when dispersed transforms as an into large brass knuckle blades which kensai holds in each hand. “Tekken Tachikazes unique ability is that it allows kensai to transfer the destructive power from his Shikai form to his brass knuckles. When Kensei lands contact with an enemy with his fist explosive force forms. Kensei can also transform his knuckle blends into regular brass knuckles and spiked gauntlets in this form. Kensei hollow mask resembles a hockey shaped face guard with six eye holes( 3 on each side) as well with extensions that cover the back of his head. Compared to the rest of his fellow visored Kensei’s mask is plain. He can only hold his hollowfication for 5 minutes, but he can do damage nonetheless. 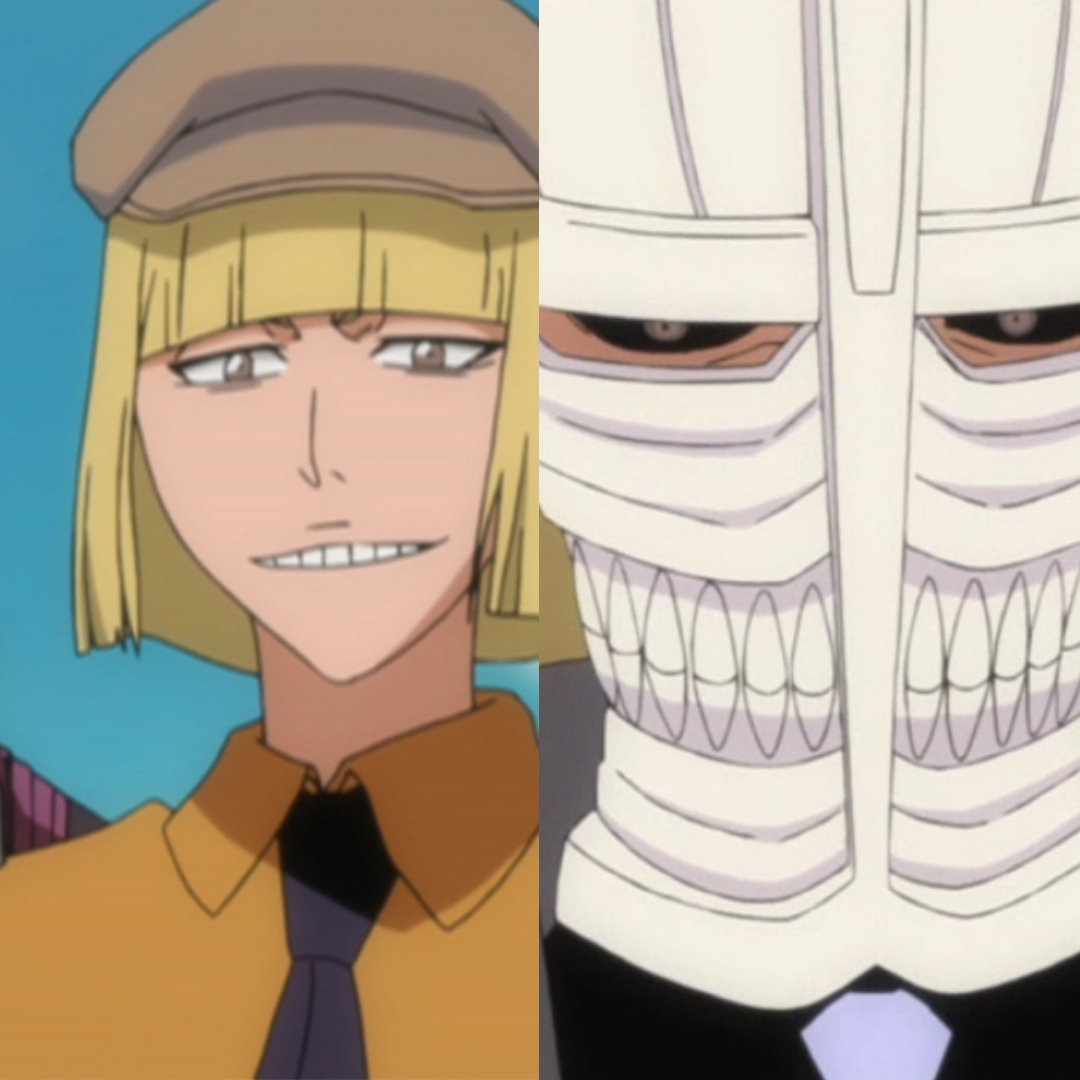 The buck stops with Shinji. The leader of Visored and former captain of the 5th division.  He has a  sense of humor.  In his past life, he was the only suspect of Aiken and seen suspicious of motives.  His influence felt throughout series long after Aizen's defeat. Shinji would not be the leader of  Visoreds without being a master swordsman, able to beat some of his team members without calling his Shikai and went toe to toe with Grimmjow in a nonchalant manner. His Shikai command called "collapse," make his zanpakutō have a sword with a large ring preparing for the latter manifestation "Upside Down World."   Emitting a pinkish mist creating illusions for his opponents smelling the rose confusing of incoming attacks, commanding battle technique comparable with Shinji intellectual. Now, with his Hollowfication in using cero is a notable powerful stream relative to his visored peers. His Hollowfication mask is plain-looking, however, using the able face-off Tōsen and Grimmjow, respectively.

The Visored are the renegade of Soul Society. But they have help  Soul Society indirectly so many ways and showed up in the war with Aizen and Yhwach, and bailout Ichigo and his friends so many times, giving a helping hand.  The Visored bleach are a critical part of the story and maybe be helping hand to Ichigo's son  Kazui Kurosaki.